In 1840 St. Mary's Church in Erie was founded to serve German immigrants in the east side downtown section of the city. The Benedictine priests from Latrobe, PA ran the parish until the mid-1990s and the Benedictine Sisters of Erie, whose motherhouse would be built adjacent to the church property a few decades later, staffed the school until then, also.

On Saturday, the two parishes became one--St. Mary of the Immaculate Conception, coincidentally the original full name of St. Mary's.

Contrary to the more commonly read stories of inner-city parish mergers, this one seems to have gone beautifully. The new pastor and Sister of St. Joseph who is his assistant are lovely. Both are dedicated to the people of God and parish life. They have spent hours working with both groups of parishioners and have ritualized together many of the steps of the process.

Saturday there was a procession from Immaculate Conception, down Holland St. and over one block to St. Mary's. There the first Saturday evening Eucharist was celebrated.

A number of community members attended: Sisters who grew up in St. Mary's parish, sisters who taught in the school, sisters who were principals of the parish school, and sisters who presently work or live in the immediate neighborhood.

A full story of this model merger can be seen here. 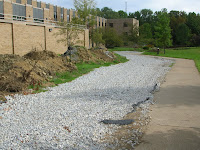 In the back of the Mount the grass and a layer or two of top soil were dug up so that a "road" could be laid between the back parking lot and the dumpsters needed for the construction site. It consists of small white stones and is really quite flat and road-like now. 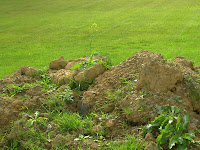 This little yellow weed-flower has sprung up out of one of the piles of soil.
Posted by Susan Doubet, OSB at 12:02 AM