If you like to keep up on the professional commitments of our Sr. Joan Chittister, this is a unique two weeks for her.

Last weekend she flew to Melbourne, Australia where she will take part in three major events. First, she gave a public lecture Tuesday night for the John Garrett Publishing Company that carries all of her books in Australia. Then Dec. 2-3 she is one of three keynote speakers for the Women, Faith and Development Summit to End Global Poverty. She will speak on poverty, especially as it affects women.

And finally, she is a speaker at the Parliament of the World's Religions, and, as such, is part of five panels on various topics of both religious and social issues. A sixth commitment there involves a session titled, "A Conversation with Joan Chittister." Sr. Joan is well-known down under as she had two lecture tours there in recent years.

This coming Sunday she "heads home"--via Copenhagen--where the group she has co-chaired for 10 years, The Global Peace Initiative of Women,(GPIW) is holding a conference simultaneously and in support of the UN Climate Change Conference, COP15, also in Copenhagen next week. The GPIW is a UN-sponsored organization of women religious leaders and their conference will present global climate and environmental concerns from a faith perspective.

Sr. Joan received an invitation to attend an Ecumenical Celebration Service on December 13 at Copenhagen's Lutheran Cathedral, the Church of Our Lady, with Rowan Williams as preacher. Williams, the Archbishop of Canterbury, and Sr. Joan are co-authors of the book, Uncommon Gratitude, which will be published by Liturgical Press next spring.

More information will be posted on Benetvision's home page.

Links are included here if you'd like to browse through any of the home pages--all of which include programs, participants, conference summaries and goals. 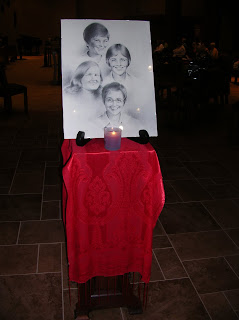 And, lest we not forget, December 2nd we commemorated the death of the four American women martyred in El Salvador nearly 30 years ago. Maura, Ita, Dorothy, and Jean pray for us and our poor war-torn world.
Posted by Susan Doubet, OSB at 12:03 AM