A is for Autopsy

It had a holiday surrealness about it as the neighboring row house had a display of lit candy canes and the nearby houses still had their outside lights up for the season.

It was cold and rainy (as we've had a green Christmas this year), just four days after December 25th. Nearly 75 people braved the elements and the sadness to Reclaim the Site for Nonviolence.

"Here we are, again," I thought, ending 2011 with our fifth prayer vigil this year; fifty-eighth since we began a dozen years ago. This one was not our "average." The average Take Back the Site Prayer Vigil is for an 18-30 year old young man---black, white, Hispanic. It's held downtown, near a bar after a fight or other type of confrontation. There are others, of course, like this one: our city's latest homicide victim, age 19 months.

The autopsy said he "suffered lacerations to his liver and his pancreas and a cut to his intestines." The day before we gathered was the Christian Feast of the Holy Innocents--the baby boys slaughtered by King Herod as he sought to root out the "newborn king of the Jews."


A voice was heard in Ramah,

sobbing and loudly lamenting:
it was Rachel weeping for her children,
refusing to be comforted
because they were no more.
Matthew 2:18 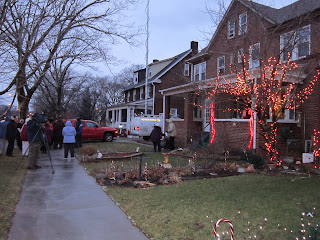 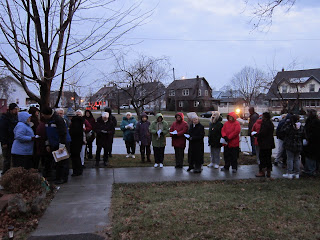 Abecedarian: an alphabetically arranged listing.
Posted by Susan Doubet, OSB at 7:35 AM