This weekend we missed one of our best "preachers"...darn! It was an interesting gospel to contemplate, I wonder what he did with it.

Here's an excerpt from the booklet Give Us This Day that we use. It's from the writer Kathleen Norris as she reflects on that reading: "No one likes a naysayer. As Abraham Heschel once commented, a prophet is someone you wouldn't invite to you home a second time....Jesus of today's Gospel, telling his disciples of the suffering and death he must endure in Jerusalem would fit this bill....But God knows that it is often through pain and hardship that we grow in compassion and love."
Posted by Susan Doubet, OSB at 2:01 PM

This is one of the last vacation weeks for many of us. Here's a look at life on the Atlantic Ocean beaches...though this could easily be our own Presque Isle Lake Erie beaches, as children seem to be drawn to the same beach activities. 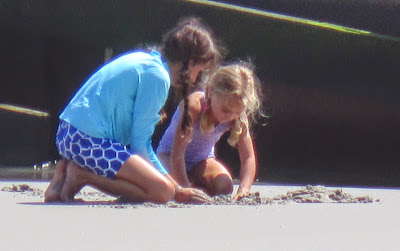 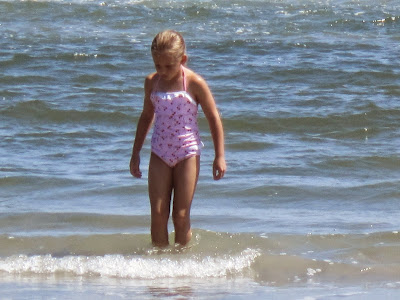 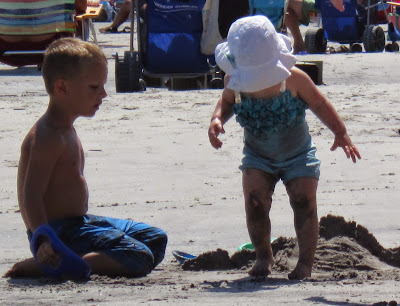 And a beautiful little garden scene with lots of feeders set out for the local birds---and a little grey squirrel I see visiting the area every day! 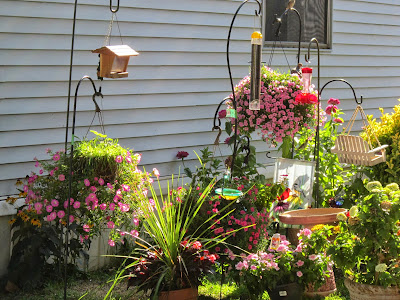 Yesterday I experienced once again the aptness of our state's name, Penn's Woods, as we traveled along I-80 across the state. Over and over again we'd round a corner or come to the top of a small hill and be awe-struck at the panorama that greeted us...acre upon acre, hill upon hill, field after field, one farm after another---all just beautiful.

The photos below were at a rest stop. Breath-taking views even at the rest stops! 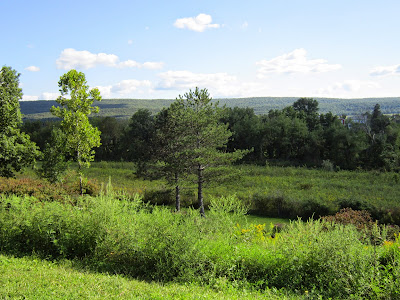 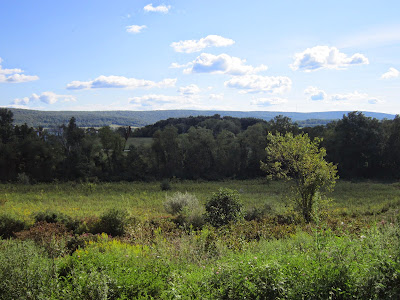 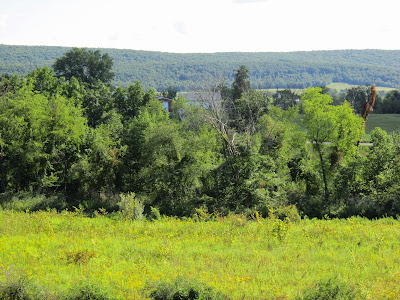 If you haven't had a chance yet, stop at our community website and read about our Sister Rita P. who passed onto eternal life last weekend. Her obituary gives a perfect description and tribute to this lovely woman. The rituals of her Mass of Christian Burial and the prayer service at Trinity Cemetery were beautiful, also.
Posted by Susan Doubet, OSB at 10:01 PM

The Take Back the Site prayer vigil this week had an unusual tone. There are lots of reasons why. First, the young man was only 20; second, yet another young black man died by a violent act; third, it was a larger than usual crowd of family, friends and mourners--maybe 150; fourth, the family, and really everyone, was especially frustrated because no one has been arrested for the homicide and no one has come forth with any information, a growing reality that is going along with the gun violence in our area; fifth, this was the fifth homicide of the year for us, with two more still to be prayed for in the next week or so--that's seven already (which was last year's total) with three of them coming since July 1.

Very, very sad and disheartening in our lovely little city--as it is suffering from lack of jobs for, primarily, the under-educated young and not-so-young adults--a growing number of refugees (who will generally, they say, be fine once they get the language and culture down, but until then, they need a lot of help), and general poverty with all its accompanying problems in housing, health care, nutrition, education, etc.

This week I am in Nashville, TN at the LCWR assembly 2014. The only touristy thing we did was spend about 3 hours at the Country Music Hall of Fame. I'm no big fan of "pure" country music, but this place is fabulous. I'll post some photos when I get home.

In another vein, the meetings of the 800 leaders of religious women began today and continue through Friday. Very nice women without a doubt. Here is our patron St. Scholastica who is among the great foremothers to whom we pray for wisdom. 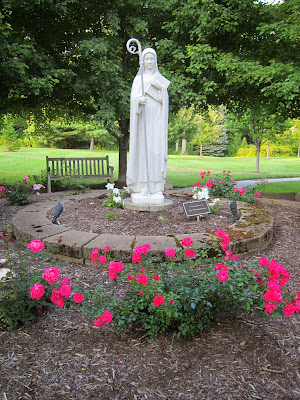 L is for Leisure

I know that in Sue Grafton's alphabet mystery series L is for lawless, but in our recently experienced LLL days, the favorite L is for leisure. Our Leisure Day turned out to be enjoyable for everyone. Primary to that evaluation was the weather: warm, sunny and perfect for all three trips as well as for those who stayed in Erie.

I went to the Chautauqua Institution a kind of place back in time--a Victorian village of the humanities: art, religion, music, lectures on every topic and live performances. It is located about 35 miles from Erie on beautiful Lake Chautauqua. I saw Mark Russell the political humorist there 5-6 years ago and he opened with, "I love coming to Chautauqua, the Club Med of the AARP!"

We enjoyed Ken Burns and an hour-long preview of his upcoming documentary this September of the Roosevelts. Watch your PBS station for the listing in your area. Looks wonderful. Then in the afternoon we had Krista Tippett from PBS radio's "On Faith" interviewing a 30-year old guy who is a columnist for many religion blogs, magazines, etc. Nathan Schneider. Great hour there, too.

But the visual highlight was this, that we saw right outside the amphitheater. I guess Mark Russell was right. 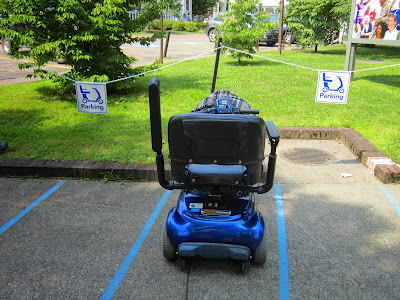 Check in on our community website as the Blessing of Ministries ceremony from our LLL days is already there, along with Anne Wambach's reflections.
Posted by Susan Doubet, OSB at 6:14 PM 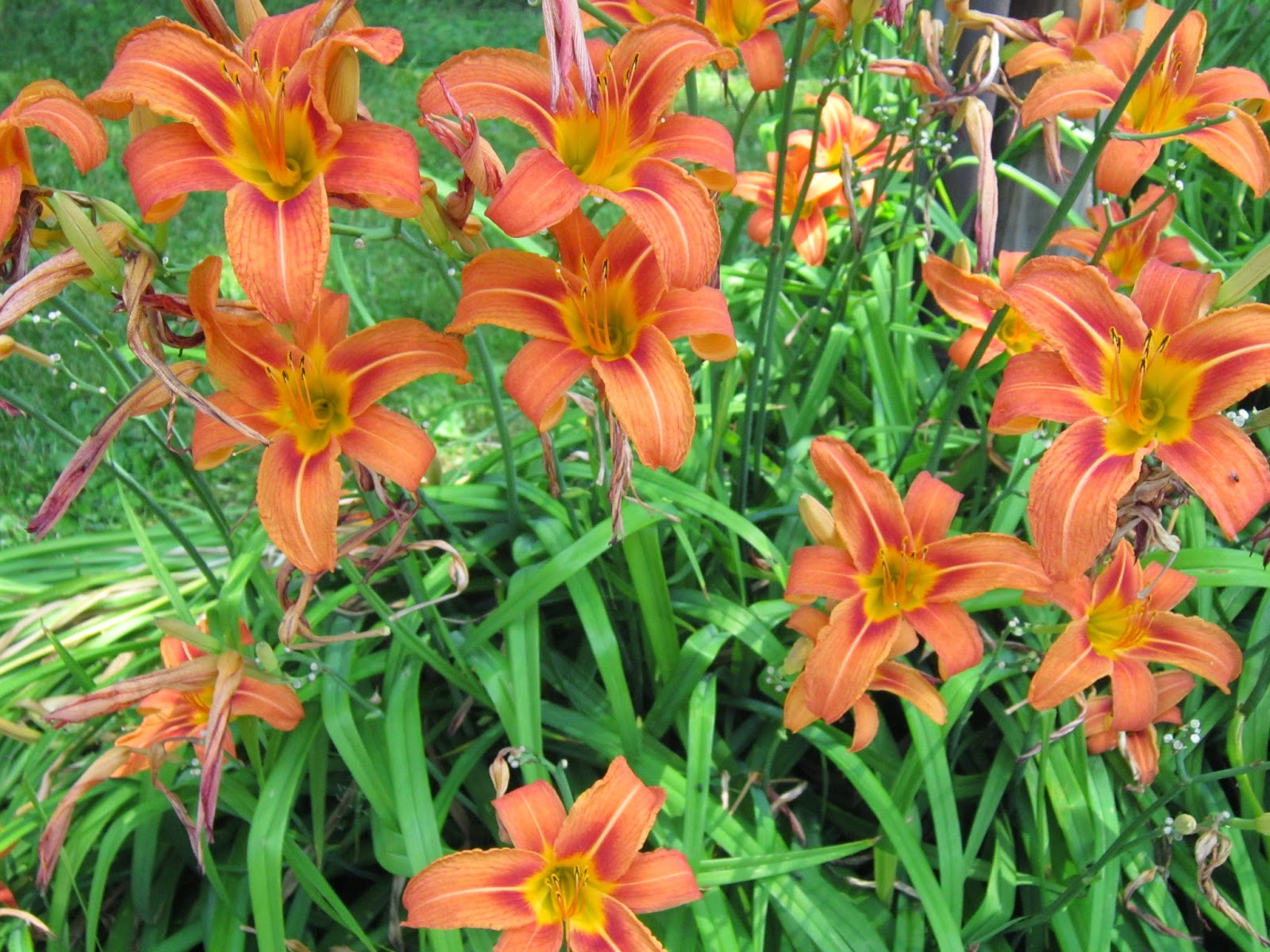 I say this, or perhaps I'm just thinking it.
Actually, I probably think too much.

Then I step out into the garden,
where the gardener, who is said to be a simple (wo)man,
is tending his children, the roses.

The Gardener by Mary Oliver 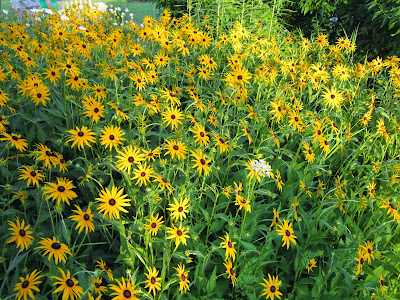 Our presider Sunday gave yet another wonderful homily on this weekend's gospel. The center of his ideas revolved around the word "dismiss" as in, "...the disciples urged Him to dismiss the crowd..." as some translations state it as part of  the parable of the loaves and fishes. He gave simple and yet such deep reflections on "dismissal" and "being dismissed." The bottom line, of course, is that Jesus, even at his most tired and private moments, would not dismiss the people who came to him for food (not literal food, but His Word) and we must do the same.

As a community that runs both a food pantry and a soup kitchen, this is a powerful reflection for us. Giving people food is not enough. They also need "food" of another sort. Are we willing to give that "food," also?


Here's a look around the Mount as it appears this first weekend of August: 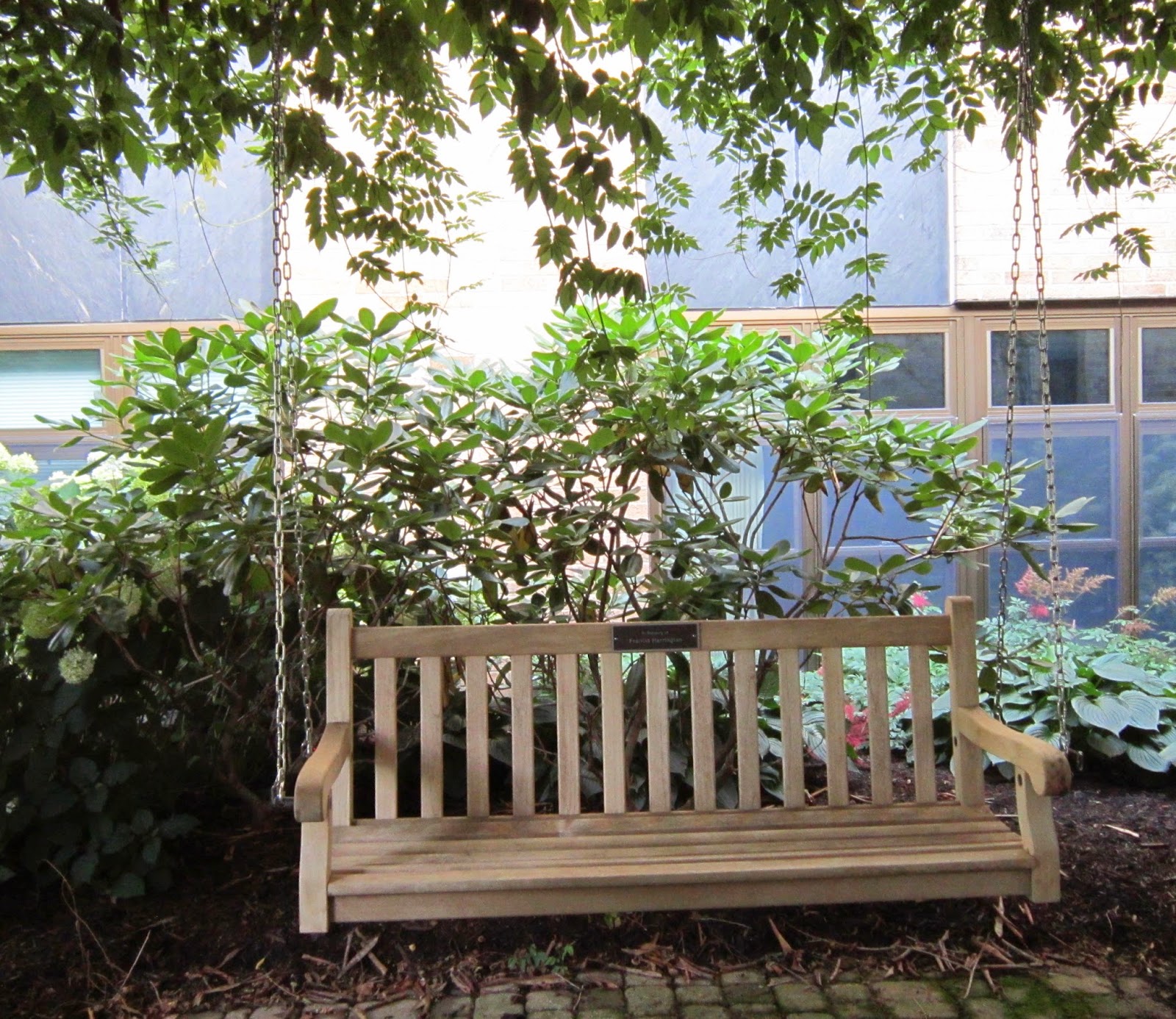 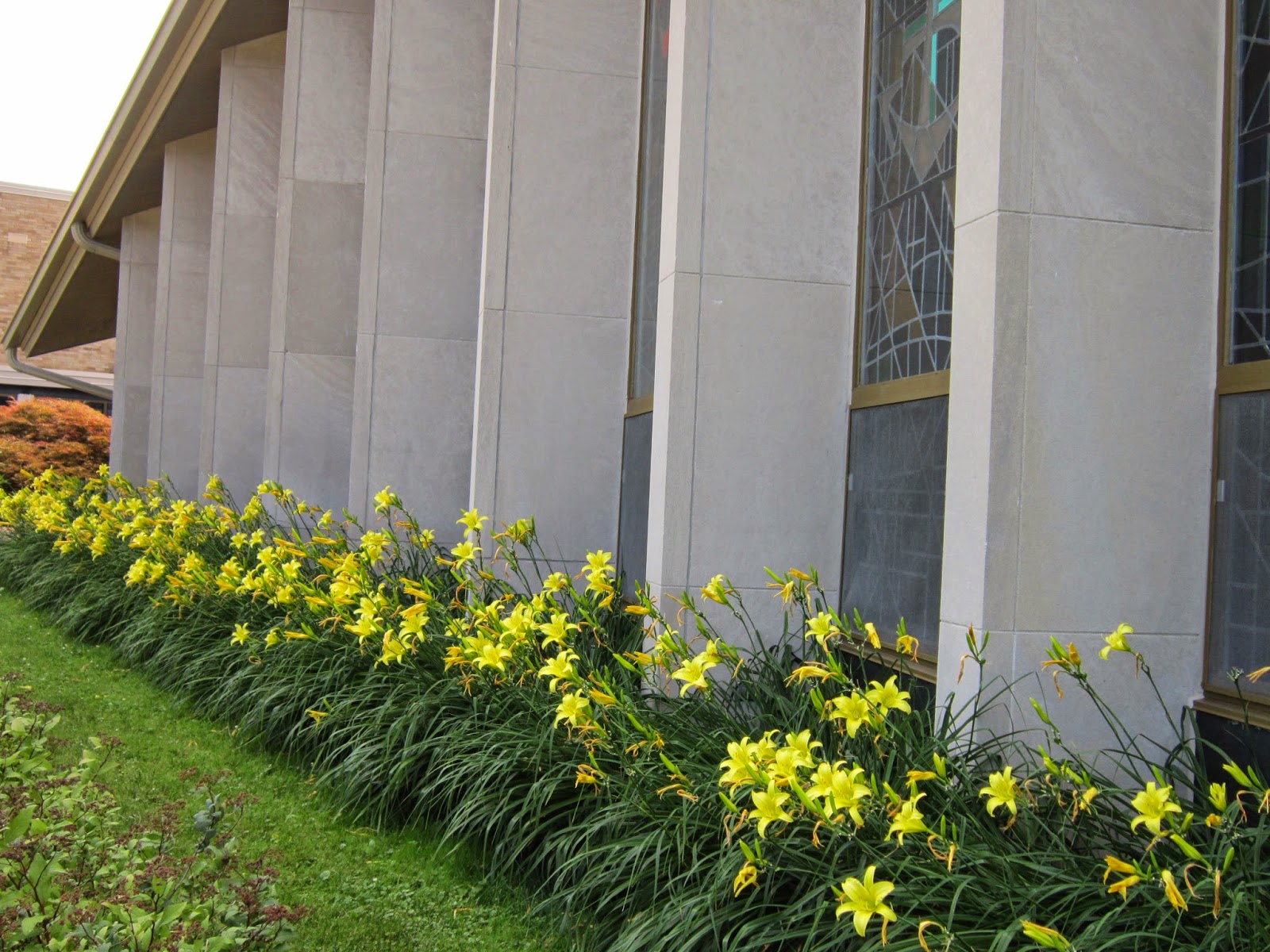