What a marvelous week of retreat we had this year! Our director was Mauritius Wilde, OSB from Schuyler, Nebraska. His sharings on the RB and on the various aspects of monastic life were creative, honest, personal and very favorably received by all. He is an author and prior of his small but highly regarded monastery. You can see a little about him and the community and congregation to which he belongs here.

As most of us are pretty "mellowed out" after a week such as this, Sunday afternoon was spent, I suspect, in transition mode as Monday morning loomed as a reality. But....there was one more thing to attend to: cheering for our favorite sports...and there were two big ones Sunday. First, the US Open, one of the four majors in the world of professional golf. This year's tournament was played in nearby Pittsburgh and found a popular player who had finished in the runner-up spot many, many times, finally break through and win his first major tournament. It was an exciting finish Sunday at about 8:10 pm Eastern Time....which, put it 10 minutes into the second sports extravaganza: the final, final, final game of the unending NBA season, which starts sometime in the fall and seems to go on forever!

But this year, the final, Best of Seven, boiled down to a seventh game between the Golden State (California) Warriors (the 2015 champs) and our own Cleveland Cavaliers (lead by the all-universe star player LeBron James).

When I passed through the community room (and its large TV screen) there were 12 sisters cheering and the score was tied. Most of those sisters have formed a loyal and faithful fan base that has followed their beloved Cavaliers all season. Here's hoping that the NBA championship goes their way tonight!

And a final note: here in the Nature World of Harborcreek sightings this week included: a young blue heron with its mother traveling up creek, a small eagle and mother flying along the shoreline, a very small fawn and its mother near Hermitage #1 and these goslings...more adolescents now, with their parents and assorted aunts and uncles, floating along in Lake Erie right off our beach. Happy first day of summer to all. 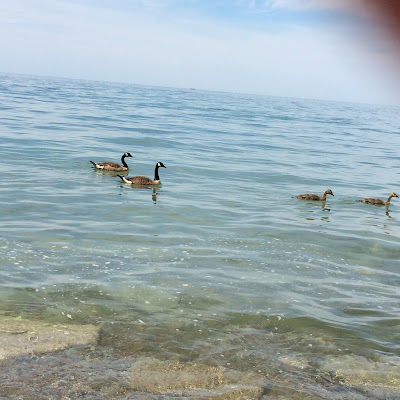