If you're from Australia

and have never seen snow fall before...

A few years ago we had a sister visiting from Australia. She had seen snow on the ground before, but had never seen it actually falling. As luck would have it, she was here for one of our first snows and she stood in amazement in our dining room as a beautiful snowfall occurred. A few minutes into it she turned to those of us around her and said, "It's not making any noise. It's perfectly silent." We didn't quite understand at first, but she explained to us that she thought it would sound like rain: tapping and clicking on windows and the ground when it hit!

This weekend we had another "Aussie in the snow" experience! Our yearlong visitor, who is leaving in just a few weeks, experienced her first, live snowstorm (we had 5" in only a couple hours) and had us smiling and laughing as she related her first two experiences. The first one came when she was taking out the garbage to the dumpster (which is only 10 feet from the back door) for her dish team and just walked out in her sneakers. She was shocked when she returned and found her shoes and socks quite wet!

The second was later when she ventured out for a walk and learned the word "trudge," as she found herself trudging through the snow! She told us that when she took her first step she was surprised that her foot when way down and disappeared! Then the second step did, too. I think she thought you walk on top of it! 5-8" deep by then I'd guess! We all had a good laugh, but on one thing we readily agreed: the first snowfall, large, wet pretty flakes is just beautiful. The snow was piled on the limbs of every tree, as it was on every bush and railing, bench, window sill and anything else in its path---all around, everywhere you looked.

And so it begins! 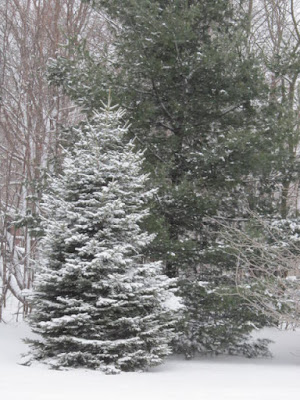