Snuggling up with a good book

Our second--rather mini--snowstorm came along earlier this week and it reminded me that it would be a good time to share one of my favorite winter photos again: St. Scholastica and the courtyard gazebo, taken from a second floor balcony. 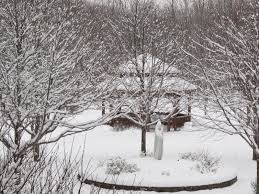 Winter is a time for many things that just don't fit quite as well in the other seasons. One of these for me is reading. Michelle Obama's book, Becoming, is making the rounds here, as is Bob Woodward's Fear. Yesterday I received a surprise in the mail, Louise Penny's brand new book, Kingdom of the Blind. There was no note to indicate the sender--perhaps I have a secret admirer!! Anyway, eat your hearts out you Armand Gamache lovers. He's off on another adventure in Three Pines and Montreal, wonderfully described and shared in Penny's outstanding writing. I'll have to read it rather promptly in order to then donate it to the library. I hear the waiting list is really long! 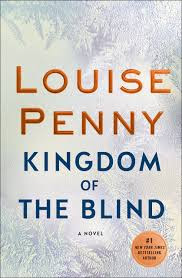 For the fourth or fifth year in a row, we've hosted the Christmas special dress rehearsal for the local singing group extraordinaire, Tennessee Back Porch. This weekend was no exception in their presentation of a unique holiday event. Many sisters and friends took in the two-hour show in our chapel and marveled once again at the vocal quality of lead singer Julie Moore and, now, her daughter Becca. The accompanying musicians are also excellent in their own areas. A wonderful, wonderful performance all around. They present their "Follow the Star" program a number of times in the area. If you're local, you should give it a try. It's great! Tennessee Back Porch's website. P.S. Who was that mystery guest oboist on that one song?

My friends all loved my Blessed Mother/Algebra story in the last post. So much so that one of them read it to the high schoolers that visited our place this weekend. She reported that they laughed and said that indeed it would be as I wrote if one of their teacher broke a statue during the Pythagorean Theorem. BTW, the girls were just delightful and we are grateful to their teacher for giving all of us, former teachers, a weekend of memories of our years with teenagers.

In response to a request for one more--here's a short one: one spring day, in a similar enthusiastic way, I suppose, the sun was bringing a strong glare onto the blackboard, so without missing a syllable, I backed up over to the windows, backhanded the hanging cord in an attempt to pull the curtain without a pause in my thrilling explanation of the problem at hand. I felt a little blockage as I pulled at it, but instead of backing up as I usually did and trying again, I tried to yank my way through it.....yanked I did, and brought the full length blackout curtains and some of the hardware they were attached to down on myself and my desk! Re-roll tape, the ending was the same: absolute silence, followed by hilarious laughter, begun by me, as I worked my way out from under the tent! And...same conclusion, that's probably the number one memory from geometry for that particular class! Poor Pythagorus.

This weekend we will have an unusual group of visitors--high school sophomores! They are being brought here by their theology teacher who was part of the Joan Chittister Institute for Contemporary Spirituality this summer--held for millennials with degrees in theology/religious education. We get lots of college-age students, but not high schoolers as a rule.

Their upcoming visit has put me in a nostalgic mood for my high school teaching days. Here's one of my memorable moments from my first or second year as a teacher. I was in the original habit and was being overly animated in an Algebra II class one day. My arms were flying around trying, I guess, to make an exciting algebra point or trying to get or keep their interest. On the teacher's desk in front of me was one of those classic plaster of paris statues of the Blessed Mother. In one particularly excited gesture my wide swaying sleeve hit that statue and sent it flying the length of the room (luckily right down an aisle) smashing the whole way, sending shards of blue and white everywhere.

Of course this brought total silence to everyone--as 35 pairs of 16-year-old eyes turned to me--too stunned to even blink. Luckily I was still young and, as I said, very excited about being in a classroom. Once the statue came to a stop I just burst out laughing, which of course allowed them to join me! Want to bet that's the only thing some of them remember from their algebra II class!

I'm sure I will continue to be flooded with memories throughout this weekend. How nice!

The snow
began here
this morning and all day
continued, its white
rhetoric everywhere
calling us back to why, how,
whence such beauty and what
the meaning;

The silence
is immense,
and the heavens still hold
a million candles; nowhere
the familiar things:
stars, the moon,
the darkness we expect
and nightly turn from. 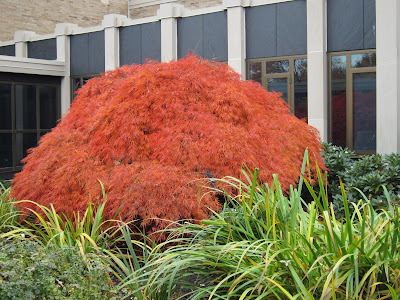 I think that this is a type of Japanese maple, but I'm not sure. Its "home" is right at our front entrance! What I do know is that it was "drop-dead gorgeous" last week in this, its full autumn color. And then, with two days of rain and winds it lost every single leaf and now stands totally empty, yet on an equally beautiful carpet of red-orange leaves!

Our autumn leaf-changing time was odd this year. Our peak is usually in mid-October but this year mid-October stayed green. Finally the golds and red came out about 10 days ago but are quickly disappearing. An odd year.

What is not unusual, but very usual, is our October-November list of visitors. Oblates were here a couple weeks ago, a group for their own retreat last Friday and Saturday and our own retreatants coming up next weekend. In between, the annual pilgrimages of family and friends, who are making the trip to Erie before the holidays come and the snow flies. (BTW: I've got all my snow measuring equipment ready to go again this year: Year #2. Great fun, especially over the long haul--not so much some early mornings in the freshly fallen snow and cold 6:00 a.m. temperatures---"Neither snow nor rain nor heat nor gloom of night...")
Posted by Susan Doubet, OSB at 8:22 PM

We are fortunate in Erie to have three lighthouses. Two are on Presque Isle State Park: The Presque Isle Lighthouse, whose light reaches out into the lake, and the North Pier Lighthouse whose light is at the entrance to the channel that leads from the lake into Presque Isle Bay. The third one was recently restored (2004), though it doesn't have a working light, and is the Land Lighthouse, located along the shoreline in east Erie about 5 miles from us. It was first built as a wooden structure, then rebuilt out of brick and finally rebuilt with sandstone. All of these took place in the 1800s.