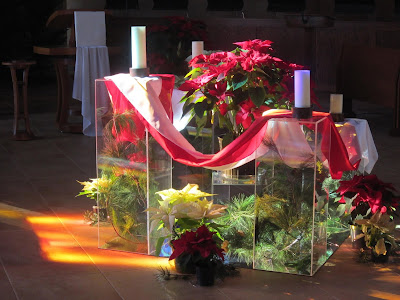 Every year we have poinsettias in chapel and every year they are beautiful. But this year...I know it's crazy, but they look more beautiful than ever: the reds look brighter, the whites seem clearer...they just look healthy and "happy"..if flowers can look happy. Ditto the orchids in my office.

After hearing all my life that orchids are a special flower, that people who grow and watch over orchids are a special breed, and that orchid flower shows are unique in their own right, I never even entertained the idea of getting one, let alone caring for it. But that changed about 5 years ago when a sister received a beautiful orchid as a gift and, after the flowers fell off, didn't know what to do with it. "I'll take it" I chirped up, forgetting my previous thoughts.

All I did, really, was put it in my office in indirect sunlight, yet lots of sunlight; talked to it, watched over it, and gave it the prescribed teaspoon of water a week. Life continued month after month after month until one day more than a year or so later I saw these odd long things growing out of it. Turned out they were roots (above ground) and after another while a stem appeared and finally flowers. It was absolutely beautiful and I was dumbstruck at the process and at the results.

That was about 2-3 years ago and I've been watering, talking and watching over it yet again, not really giving it the attention that I do all the other flowers which seem to need more.....and voila, it's happened again: roots, stem and flower buds have appeared. Watch this space: I hope in the next few weeks to share its beauty with you.

P.S. In another forgetful moment, I adopted a second gift-orchid a couple years ago and have given it the same treatment. Nothing happened...until two months ago: out come the roots and now I am watching diligently for a stem to appear! Ha--maybe I should look up when the next local orchid show is scheduled!
Posted by Susan Doubet, OSB at 8:45 PM

We have a lighter number of overnight visitors these holiday weeks, but we do have one very special guest. From the Benedictine Sisters of Daegu, South Korea, Sister Xavieria is with us for the four-week break between semesters at the University of Dayton in Ohio where she is studying English. This is a lovely community of a couple hundred Benedictine women who run all levels of schools, including a college, as well as large hospitals. We have had two or three of these Sisters here, usually to improve their English. Xaveria comes for the same reason and is just delightful. We hope she comes for other "college breaks"! 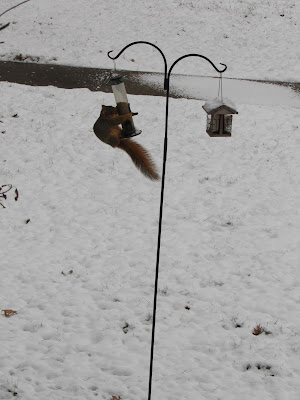 
I've been hearing lots of versions of Leonard Cohen's song Hallelujah. It is such a haunting, deeply spiritual song. Despite all the beautiful renditions my favorite is still the one sung by Cohen himself--here.

Blessed Holidays to All

My friend who is a poet, finds wonderful poems that she shares on the blogs she manages. Here's her entry for this Advent.

Once a young woman said to me,
“Hafiz, what is the sign
of someone who knows God?”

I became very quiet,
and looked deep into her eyes,
then replied,

“My dear, they have dropped the knife.
Someone who knows God has dropped
the cruel knife that most so often use
upon their tender self and others.”

With great sadness I realized that we are 1/2 way through Advent already. I haven't even heard every song in our Advent music booklet yet, in fact it may be an impossibility as there are 57 songs and only 23 days of Advent this year!

Nonetheless, Kris Kringles are alive and well. Little gifts appear in mail boxes and shoppers get out to purchase their little package for the gift exchange Christmas Eve. Here are two Kris Kringle items that appeared in my hallway: a lovely vase of berries and greens and a Merry Christmas Advent calendar (isn't that an oxymoron?) with Peanuts characters!

By this weekend Christmas will begin creeping in more and more.....slowly, slowly. 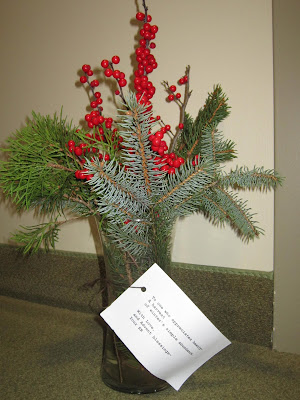 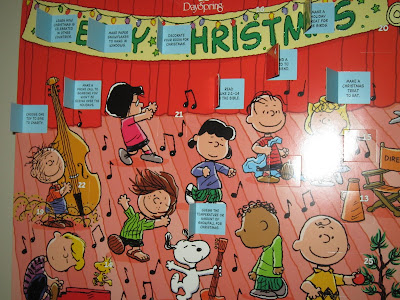 Last evening we had the opportunity to attend an hour and a half "event" held in downtown Erie, a conversation with Chris Matthews, host of the MSNBC evening show "Hardball." Sure Cokie Roberts was here a couple years ago, and we heard Doris Kearns Goodwin last month as part of the same series, but generally these aren't an every week occurrence here, 350 miles from DC as we are.

In contrast to his rather in-your-face interview/hosting style on TV, he was casual, warm, very funny, Catholic, Irish, and generally "a regular Philly guy" as Anne, a regular Philly gal herself, concluded. He shared his opinions and mostly his experience of years in the world of national politics and journalism. He was not overly judgmental nor overly critical. One of the memories I will have is that although he clearly admired some presidents and politicians more than others, he said that most of our presidents were a mixed bag...good and admirable things in all of them and the opposite, too.

His latest book is about Bobby Kennedy who he thinks was quite the unique man and politician--and often the not-so-secret influence behind his brother's presidency.

It was delightful evening.

We haven't had snow in about a week....no complaints here, just the facts!

Today we had the fluffy stuff, really light and really beautiful. Our winter-long commitment to our bird population is strong. Here is how pretty the feeders looked, just before a refilling this afternoon! 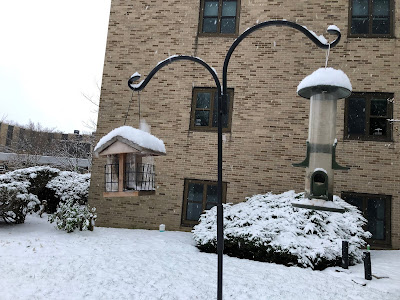 Thanks to recently acquired gift certificates we took in lunch at a new-to-us restaurant, the Brewereie. Located in the old Union Station at 14th and Peach, I was overwhelmed when we opened the front door: "Oh, I wish my Dad could see this" I said out loud. In fact, I wish all old-timer Erieites who remember the station as a busy train hub, could see it now. WOW!

We sat in one of the "booths"--really old waiting room high-backed wooden benches and then walked all around while we awaited our soup and salad lunch--which was delicious. Oozing with natural atmosphere, it is a wonderful nostalgic trip a few decades back when passenger trains came through towns like Erie on a daily basis and were one of the primary modes of transportation.

If you live in Erie or visit it regularly I encourage you to give it a try (it's open for lunch, dinner and its famous beers every day). Enjoy! 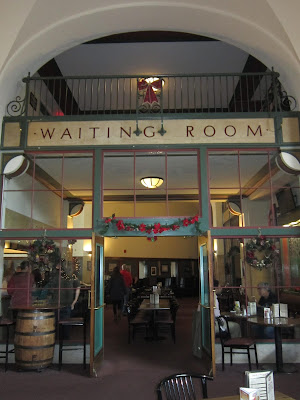 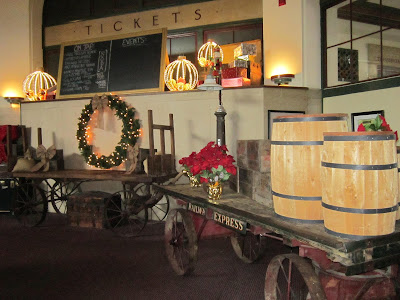 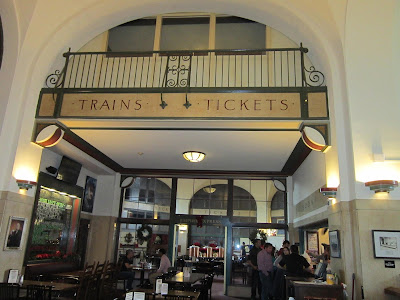