In the 8th century 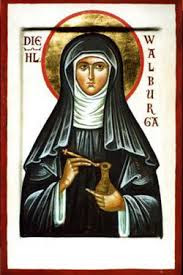 Today is the feast of St. Walburga, a popular, yet little known saint of the eighth century. She began her Benedictine life in England but traveled with her uncle, St. Boniface, and her brother to Germany to spread Catholicism and Benedictine life there. She and her brother became the leaders of two communities and when her brother died she was made abbess of the double Benedictine monasteries-one for women and one for men. One hundred years after she died her remains were moved to Eichstatt in the Bavaria region of southern Germany. The group of women who tended her grave site became the nucleus of what evolved into the present community of St. Walburg in Eichstatt.

In the 1850s Sister Benedicta Riepp and two other members of the Eichstatt community came to the United States to teach the German immigrant children in western Pennsylvania. From that first foundation 50 communities were founded, 35 of which exist today. Our community here in Erie is currently the longest in existence at 163 years of age! In the 1930s during uneasy times leading up to WWII, Eichstatt sent sisters again to the US and founded two communities that remain members of the German Federation today. One is east of Pittsburgh in Greensburg, PA the other in northern Colorado in Virginia Dale.