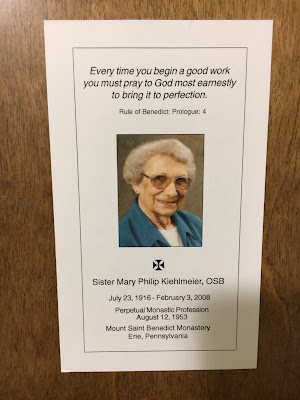 At lunch today I was mentioning that I hadn't had a chance on Saturday morning to do my weekly watering of the six ferns that hang in our dining room because of community meetings that we had all weekend. But I was worried about them because the air is so dry this time of year and a couple of them looked especially in need of water. So I planned to water them during the half-time of the Super Bowl game!

This declaration lead to questions that brought these answers: a) for about 20 years; b) no, but they all are offshoots of the original two; c) I think they came from Sr. Mary Philip at a jubilee. Then we realized that this was the death anniversary of this lovely and quite unique gal, Sr. Mary Philip Kiehlmeier who entered the community in her 30s (unusual at that time) and lived into her 90s.

Sr. Lenore Shaw, another late bloomer, entered community twice in her 20s, (left both times) and then returned for good 30 years later! Lenore was a true "character" who we remembered this weekend, also, as our Super Bowl pool is always in her honor (she was the first organizer of this annual event).