I wasn't a first-class participant in this (ad)venture--I just saw a little at the beginning and passed through near the end, but here is the gist of the hour and a half event as I understand it.

As I was leaving for a prayer vigil downtown on behalf of the immigrant children being held at our southern border, I passed through chapel and heard a sister exclaim, "There's a chipmunk on the altar!" After verifying this unusual announcement, I grabbed my phone and took this shot. 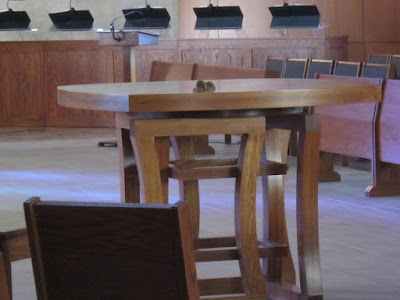 Soon two sisters, armed with a piece of paper and a plastic bag, tried in vain to coax it into the bag. It would have nothing to do with that and scampered down to the chapel floor. I went off to the prayer vigil and when I returned an hour later, I traveled through the chapel again. Much to my surprise about a dozen sisters were there now (arriving for lectio a 1/2 hour before evening prayer, I presumed) and they were up and kind of dancing around, stamping their feet and waving their arms. The chipmunk had reappeared!

I continued through the chapel but I did return twenty minutes later, wondering what in the world I would see now. All was calm, all was bright. Quiet, serene and chipmunk-less. It seems that all the "encouragement" by the sisters had finally sent the chipmunk to the open door and off it went, most probably grateful to escape this odd group of animals.

"What do you do all day in the monastery?" we still occasionally get asked. It's very hard to give a full accounting!
Posted by Susan Doubet, OSB at 7:27 PM