It's mushroom time at our Glinodo property, especially along the boardwalk down to the lake. There are three large evergreens rather close together and in the grasses around them a colony of mushrooms seem to pop up every fall. I've been disappointed that I haven't seen them this year, even thinking that I'd missed them entirely, as I don't get down there as much as I wish. But, today I did and found this amanita mushroom. Well, I'm not sure it is an amanita, for 20 minutes on google and google images doesn't make one a mycologist (one who studies mushrooms)!

Anyway, if it is an amanita it is not one of the edible kinds of mushrooms, poison in fact. No fear here, I wouldn't even think of picking it, as it is beautiful to just behold! I hope some of its friends come along soon though, they make a lovely setting for October viewing. 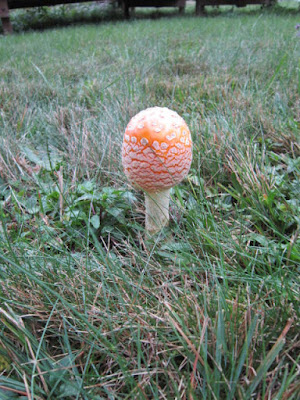 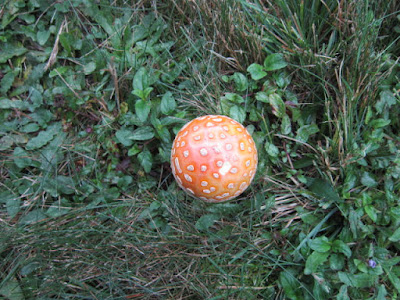