I just finished Louise Penny's latest effort to bring us outstanding, thrilling mysteries mixed with equally enthralling characters. The Better Man is the 15th in her series about Chief Inspector Armand Gamache and the cast of characters that he works with in the Montreal Surete as well as those in his village, Three Pines. One of my friends said that this might be her favorite of all of them, but that's hard for me to say after fourteen others! If I really, really had to pick one (which I do not want to do) it would probably be How the Light Gets In, though as soon as I say that I think of others that I loved equally! 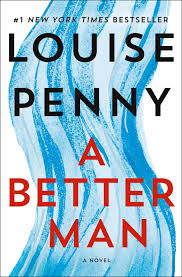 In this book one of Penny's recurring themes is in full view and that is the theme of conversion or redemption, you might say. This time it's Clara, the brilliant artist in Three Pines and Jean Guy, Gamache's protegee and son-in-law who continue to struggle with their demons--not that they haven't made progress, they have...but conversion continues each day--as the Rule of Benedict professes!

The books continue to charm, the excellent writing by itself is reason to return to them. The only downside is the fact that only the first, Still Life, has been made into a film. Come on film makers...there are many more!