In the early 1970s my interests swayed little from my dedication to becoming a good high school teacher and the same for becoming a finally professed religious woman. I had little knowledge of the stories behind the political news of the day and, therefore, only got the big picture of Watergate and the Nixon era. Now, forty years later, along comes Rachel Maddow and her unique and compelling brand of storytelling to get the whole picture behind current events. 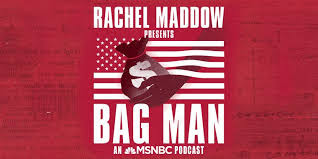 Recently Rachel produced a series of seven audio programs, Bag Man, on the background stories that led to the resignation of Vice-president Spiro Agnew, an event that was a pivotal prelude to the resignation of President Richard Nixon. They read like a modern day spy/thriller and have eerie similarities to today's political picture!

I want to encourage you to give them a try. Just listen to the first one (they are each only 30 minutes long). And, if you are hooked, as I was, I know you'll be fascinated with this time in our recent history, knowing now how things evolved over the next four decades and what could have happened--had things gone another way.